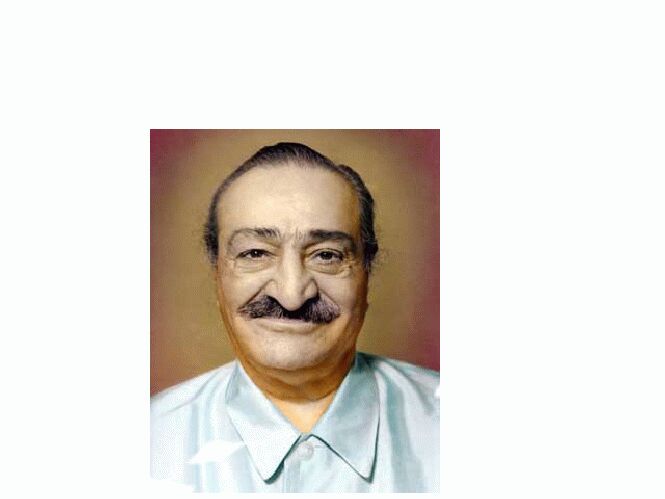 1979 31.of January I visited Meherabad, the Tomb of Meher Baba
I first came to know about Meher Baba through the Whos rockopera "Tommy".
I had read some of His sayings, and seen His picture in India and Nepal in 1976, where I stayed at Bodhanath, waiting for Karmapa, meeting Dudjom Rinpoche-taking walks to the nearby hindu-temples, reading sufism, Krishnamurti -had strange meetings with a sadhu every week-end at Swayambhu.

31. of January -called Amartithi-was a special day at Meherabad, the anniversary of Baba dropping His body. I had met an old girlfriend in Nepal before
Christmas, and was "seduced" into chain smoking charash-again. I introduced her to the nepali pharmacies. I wanted to go to Rishikesh, she to see Goa.
So we agreed on Poona, as she also would like to see Rajneesh.-I told her of Baba, and here we were, in Meherabad-first day without a morning chillum.
I was standing watching the scene,---- mostly americans and indians celebrating- It was a big day-Baba dropped his "Cloak" in 1969-so it was special.
Eruch Jessawalla,who the last 25 years interpreted Babas unique hand gestures as He was in silence, came up to me:"Where do you come from?" he said."Denmark", I said.----"They´d all been here: Ram Dass, Al Cohen, Richard Dreyfuss,Timothy Leary".. Eruch named some former leading persons of the lsd-movement."Timothy Leary?" I said a bit surprised and overwhelmed at hearing those names mentioned.-----"Timothy Leary`s insane!" Eruch snared.
I don´t remember if I said:---"He´s a saint." I think so.--Then Eruch snared at Rajneesh. I was not unagreeing, his people were pushers and intellectuals.

Eruch said in the summer he and family from the Baba-inner cicle went to Darjeling.--"I know people there" I said. "Who?" he said."Tibetans." I said.
Eruch did not look pleased.---- At the Rajneesh place Sheila, his secretary, had reached out for my mala, when we asked if we could see the Master.
"What are those beads?" she had asked."Tibetan" I had said and she had looked totally disinterrested, so we were thrown at the mercy of the surrounding drug dealers.We were just naive, young westerners trying to deal with indian culture. Eruch was bearing over and told me, I could go and see Babas Tomb.
There were about fifty people standing in line so I left. And Now he totally ignored me.I was starting to feel sick in my stomach, not unusual, and all this was very indian, a"clean" trip.A young american started following us around.Ok, I was feeling the loss of cannabis-power by now, certainly.

An indian we had met in Poona
who had met Baba, and called himself "Dust on Babas feet" came over when we were having a cup of tea.Some americans suddenly rushed in and scared him away! He was our friend, we had visited his house.He had a big painting of Meher Baba outside his house, so we knocked on his door and had tea with his family.

I could hardly wait to get back to my pipes of siddhi and a puff of O. I don´t know what was all this. We were unclean-unbelievers? Probably!

I guess Eruch cold see we were into dope, and was playing a fierce role, and they all were protecting their castle. If you went to the Rajneesh ashram-to mention that again-you could see were it all went without some form of discipline, he was experimenting with everything-himself and other peoles lives-so Baba people were probably just protecting their place from being run over by hippies and indians-or were trying to create a solid western base for their mission of spreading the message of Meher Baba
!

I guess it took five years or so-I still continued reading Baba-meditating on the Buddha-(I had long ago stopped smoking anything -it was only in India in 79,-married,children etc.)-and was one night standing looking through some news-letters from a Baba-group, that were full of pictures of Meher Baba -all in a not very good quality-black and white photo-copies
suddenly -as i was looking at a picture of this lovely man-unaware- there was this incredibly deep very,very strong feeling of love and bliss -just a second as my mind started: "What?" it was gone.--It was grace so -I am a believer. -Later again Meher or Buddha or God in a very special way showed me grace, as I met a buddhist monk faraway from no-where as i prayed for a way- what to follow but all that is not for unbelievers only sinners and coming saints blessed are the saints.